The Rhinesteig – Wiesbaden to St. Goarshausen

This exceptionally well sign-posted and closely networked trail offers the opportunity to explore the landscape and culture of Germany in all its comparatively undiscovered glory.

The whole trail is offered as a self-guided holiday divided into three week-long sections, with a fourth possibility that acts as a Rheinsteig highlights.

It can easily be reached by train, boat and car and is near several airports.

£599 per person for each section based on 2 people sharing

Journey to or from home, lunches and dinners, drinks, insurance, anything not specifically mentioned in programme.

Moderate. You must be able to walk the distances mentioned and deal with a significant amount of hills and cliffside paths. On most days the walk will take you up from the riverside to the path above. A head for heights is also essential.

arrival at Wiesbaden and overnight

Wiesbaden – Schlangenbad (16 km, 360 m height difference)The Baroque palace of Schloss Biebrich, located on the banks of the river, is an idyllic backdrop for the start of your walk along the Rhine Valley. The Rheinsteig follows the river, passes the harbour of Schierstein, before ascending away from the river for the rest of the day to the Rheingau Hills. Pass the restored keep of a medieval castle at Frauenstein, with good views from the Goethestein viewpoint. Narrow paths through the forest to reach the mighty rock formation of the Grauer Stein. Schlangenbad, hidden in a narrow valley, is a traditional thermal spa.

Schlangenbad – Oestrich-Winkel (21 km, 410 m)Return to the Rhine through forest, orchards and Rheingau vineyards. A fine view of the Rhine Valley near the ruins of Scharfenstein castle before you come to Kiedrich village, a medieval gem and home to Germany’s oldest playable organ. Ascend Honigberg hill, pass the monastery of Kloster Eberbach (location for the film “The Name of the Rose”) and a venue for connoisseurs of wine. Pass Steinberg, Eberbach’s best known vineyard location, enclosed by a 3 km long stone wall. The path continues through woodland, meadows and vineyards, along the hills above the Rhine and the wine-grower’s villages of Hallgarten and Oestrich-Winkel.

Oestrich-Winkel – Rüdesheim (19 km, 430 m)As on the previous day, the Rheinsteig trail repeatedly meets the “Rheingau Riesling Path”. Idyllically surrounded by vineyards, the palace of Schloss Vollrads is the next traditional place for Rheingau wines – tasting possible here. An initial ascent through the forest is followed by a steep passage downhill to the Elsterbach valley, the location of the Kloster Marienthal monastery, a popular place of pilgrimage. It is only a short way to the next cloister, Kloster Nothgottes, followed by the abbey of St. Hildegard. The day ends at the massive Niederwald monument near Rüdesheim.

Rüdesheim – Lorch (18 km, 340 m)Many brilliant views of the Rhine Valley to Bingen, where the river Nahe flows into the Rhine. A walk through the artificial tunnel passage of the Zauberhöhle (magic cave) is followed by the steep descent to Assmannshausen by the river before ascending again. Narrow and rocky paths lead you along the slopes of the Rhine Valley, crossing small valleys before having another classic view at the Drei-Burgen-Blick viewpoint (“Three Castles View”). A steep descent down to Lorch, where a single row of houses lines up along the bank of the Rhine for over three kilometres.

Lorch – Dörscheid (19 km, 560 m)The Rheinsteig trail leaves the state of Hesse and the Rheingau region, taking you to the state of Rhineland-Palatinate. The course of the walk is close to the Rhine, often directly along the slope of the Rhine gorge, with excellent views of Bacharach and Burg Stahleck castle at the Wirbellay viewpoint. In the Volkenbach valley note the the fortified castle of Pfalzgrafenstein scenically located on a small island in the middle of the river.

Dörscheid – St. Goarshausen (19 km, 360 m)This challenging stage is one of the highlights of the entire trail. It closely follows the Rhine from above, with an abundance of dramatic views, including of the Loreley rock near St.Goarshausen. You ascend and descend a succession of smaller valleys After passing Burg Katz castle above St. Goarshausen, a final climb to the Patersberg hill is worth the effort, because it adds one last highlight to the many others of this great stage taking you to another “Three Castles View”. 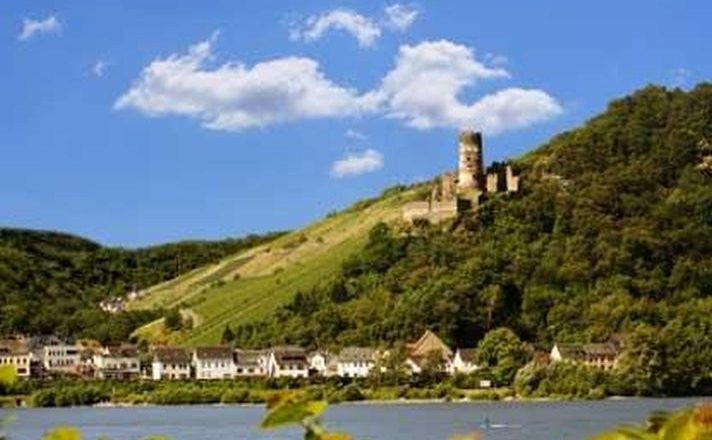 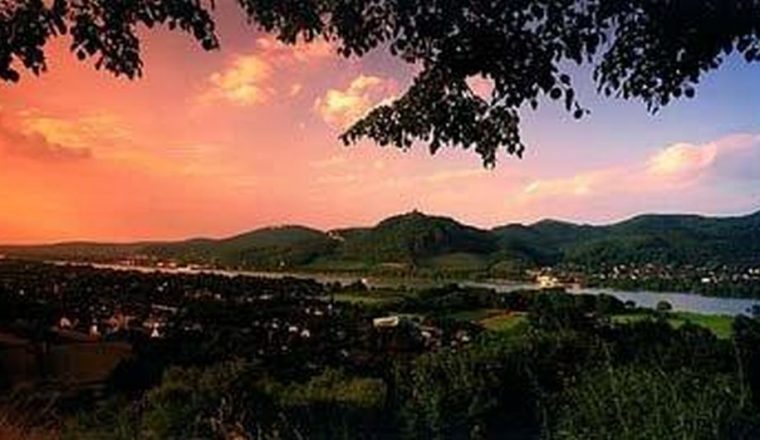